ETHIOPIAN COFFEE - BIRTHPLACE OF THE BEAN

According to Ethiopian legend, coffee was discovered by Kaldi, an Abyssinian goat herder in 850 AD.  The story goes that Kaldi discovered coffee after observing the energy boost his goats gained from consuming mysterious berries, which we now know to be coffee beans.  After sampling them himself, Kaldi gathered up the berries and brought them to his village's head monk who claimed they were “the devils work” and threw them into the fire.  The roasting coffee beans filled the monastery with a powerful aroma and the head monk ordered the other monks to rake the coffee beans out of the fire and place them in hot water for consumption.

While this is a fun story, there is little evidence that this is how the Ethiopians discovered coffee. In fact, the first iteration of this tale does not appear until the 1400s.  There is also evidence that it was customary to chew on coffee beans in Ethiopia prior to brewing coffee.  Although there are some doubts as to the legitimacy of this legend, there is written evidence of Ethiopian coffee brewing as early as 900 AD.

Ethiopia’s coffee history has created a rich coffee tradition that still occupies a place in Ethiopian culture.  The Ethiopian coffee ceremony plays a major role in Ethiopian culture and everyday life.  The coffee ceremony is a very important social and spiritual event that takes place for two to three hours three times a day.  It is customary for the women of the household to perform the ceremony in the morning, afternoon, and evening, or when welcoming guests into their homes or in times of celebration.  The ceremony involves the women of the household to process the raw, unwashed coffee beans into finished cups of coffee. 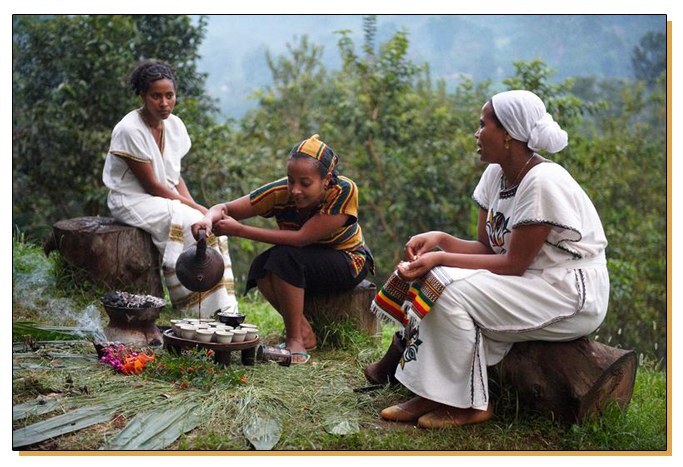 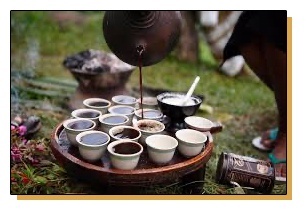 The coffee ceremony is a multi-step process that last two to three hours: